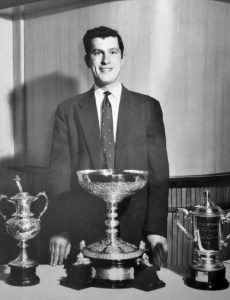 By 1949 – At the age of 12 he joined the Arbroath Artisan Golf Club as a junior and it wasn’t long before he won his first competition, the Junior Biscuit Barrel, which was then the only competition for Juniors. He went on to win that trophy 3 times. As he progressed at golf his father and some friends thought that he should enter the British Boys Championship, which was to be held at Barrassie in Ayrshire. In that competition he reached the 3rd round and that was the start of his experience of golf at a high level. At 18 he became the youngest ever to win the Arbroath Links Championship and his first county cap came when he was just 20. During his national service, for which most of the time he was in Germany with the Gordon Highlanders, he was involved in the construction of a golf course at Hana, at a garrison near Belson Concentration Camp. On the 19th November 1961 Rich was demobbed and the following days were spent playing golf, then it was back to work in the Herald Office where he worked as a printer. At this time he was beginning to reduce his handicap and was also doing well in Angus County Events. 1963 was the start of a special year, first of all he won the Artisan Club Championship and then later did something which has never been by anyone else from Arbroath, he won the first of his Angus County Championships and in September to crown a superb season, he won the Craws Next Tassie at Carnoustie, an event which he was forever proud of.

The management of the Arbroath Herald allowed him time off but only on condition that he came back to work after each round which he agreed to, never expecting to go the full week! On Tuesday morning he was at Carnoustie to play his first qualifying round, and then it was back to work until 7.30 in the evening. Same on Wednesday – Carnoustie at 7.30 and then back to work. On Thursday he played 2 matchplay rounds then back to work and as he was printing the “Herald” newspaper he finished at about 2.30 am on Friday morning. He was up to play the next round at 9 am, and on winning his next 2 rounds he was in the semi-final on Saturday morning. He ended up 4 down with 4 to play and who would have believed it but he won all 4 holes to go match square and up the 19th. His opponent had all sorts of trouble and Rich’s par 4 was good enough to see him in the final. In the afternoon you can imagine how drained he was having completed all those rounds of golf as well as having to work long hours. However, he managed and went on to win the Tassie by 3 & 2. What he achieved that week was spoken about in almost every golf club in the district and he often wondered how today’s youth would have coped if competing under the same conditions.

His year ended on what he considered as a very high note because the Artisan Golf Club honoured him for his achievements by presenting him with a gold watch, which after all these years he still regularly wore. In the Scottish Amateur Championships at Muirfield he was beaten by the winner Gordon Cosh, and as usual his putting let him down. It was common knowledge throughout the golfing fraternity that he was one of the best strikers of a golf ball but one of the worst putters and unfortunately it let him down time and time again. However, he persevered and managed to keep playing at a high level even despite this affliction.